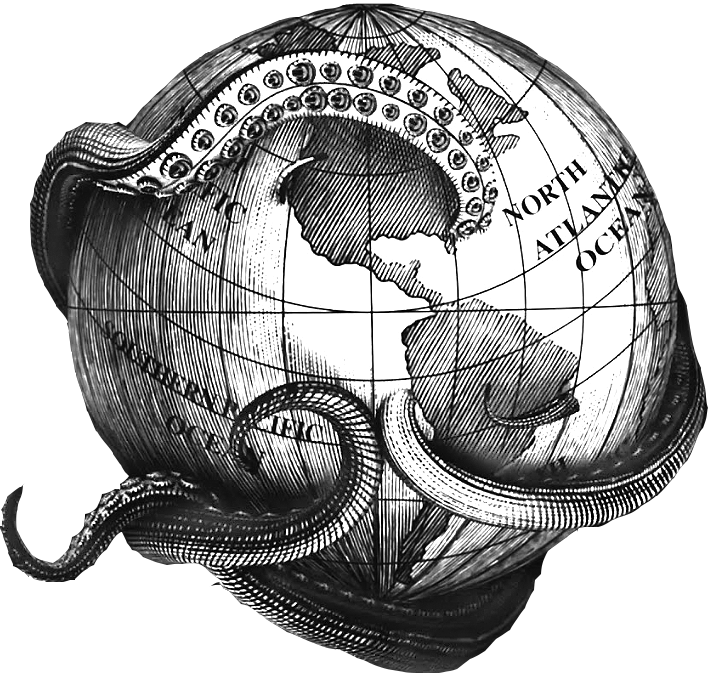 Bitcoin nodes communicate with each other via a peer-to-peer network to transmit transactions and blocks. Nodes relay these packets to all their connections, which has good privacy properties because a connected node doesn't know whether the transmitted data originated from its peer or whether the peer was merely relaying it. 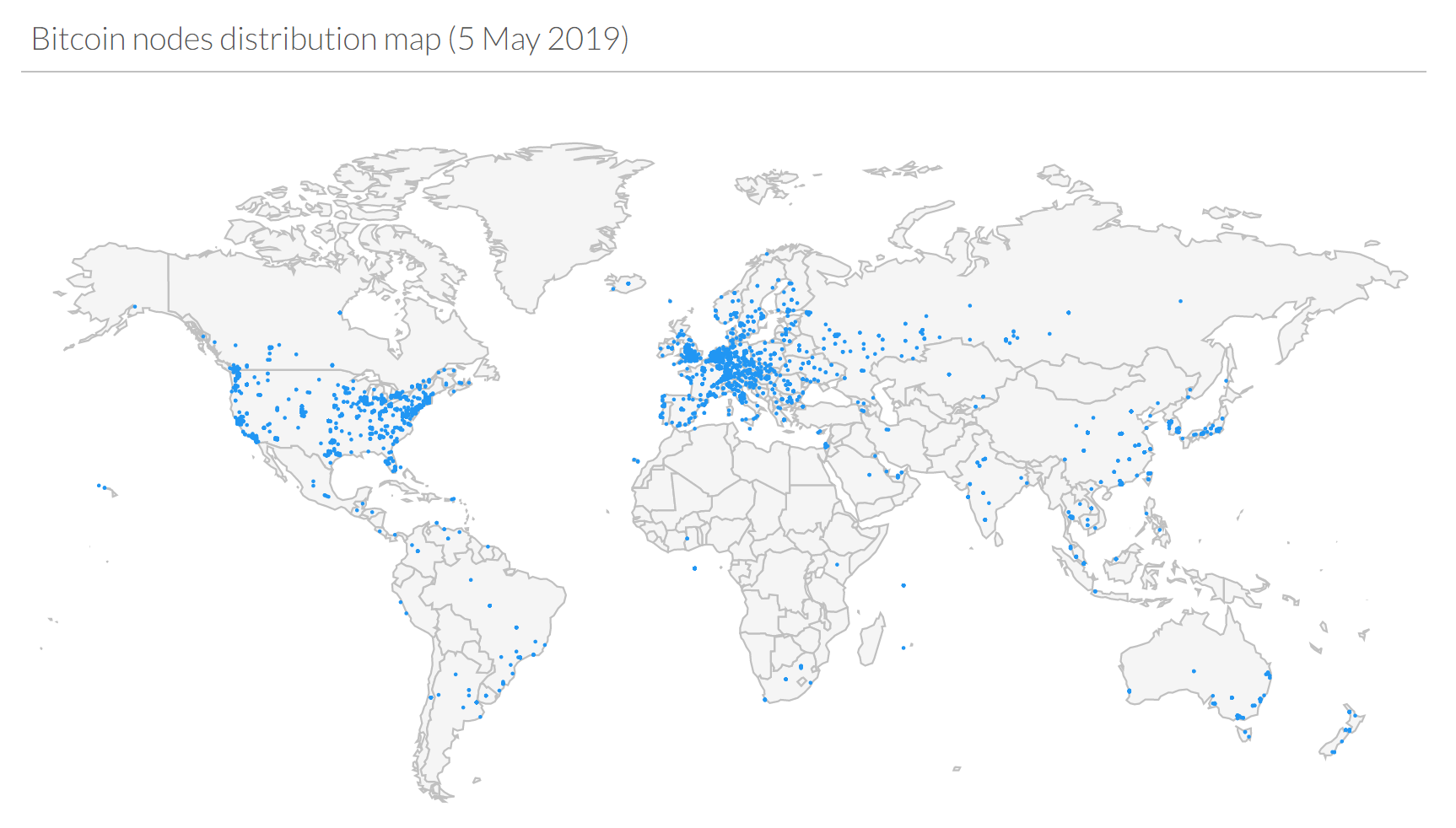 An adversary able to snoop on your internet connection (such as your ISP, a Wifi provider or a VPN provider) can see data sent and received by your node. This would reveal that you are a bitcoin user. If the adversary sees a transaction or block coming out of your node which did not previously enter, then it can know with near-certainty that the transaction was made by you or the block was mined by you. As internet connections are involved, the adversary will be able to link the IP address with the discovered bitcoin information.

A certain kind of sybil attack can be used to discover the source of a transaction or block without the adversary entirely controlling the victims internet connection. It works by the adversary creating many of their own fake nodes on different IP addresses which aggressively announce themselves in an effort to attract more nodes to connect to them, they also try to connect to as many other listening nodes as they can. This high connectivity help the adversary to locate the source newly-broadcasted transactions and blocks by tracking them as they propagate through the network. Some wallets periodically rebroadcast their unconfirmed transactions so that they are more likely to propagate widely through the network and be mined.

Some wallets are not full nodes but are lightweight nodes which function in a different way. They generally have far worse privacy properties, but how badly depends on the details of each wallet. Some lightweight wallets can be connected only to your own full node, and if that is done then their privacy with respect to traffic analysis will be improved to the level of a full node.

Some bitcoin wallets are just front-ends that connects to a back-end server run by some company. This kind of wallet has no privacy at all, the operating company can see all the user's addresses and all their transactions, most of the time they'll see the user's IP address too. Users should not use web wallets.

Blockchain explorer websites are commonly used. Some users even search for their transaction on those websites and refresh it until it reaches 3 confirmations. This is very bad for privacy as the website can easily link the user's IP address to their bitcoin transaction (unless tor is used), and the queries to their website reveal that the transaction or address is of interest to somebody who has certain behavioural patterns.

To get information about your transactions it is much better to use your wallet software, not some website.

Many lightweight wallets use the BIP37 standard, which has serious design flaws leading to privacy leaks. Any wallet that uses BIP37 provides no privacy at all and is equivalent to sending all the wallets addresses to a random server. That server can easily spy on the wallet. Lessons from the failure of BIP37 can be useful when designing and understanding other privacy solutions, especially with the point about data fusion of combining BIP37 bloom filter leaks with blockchain transaction information leaks.

Electrum is a popular software wallet which works by connecting to special purpose servers. These servers receive hashes of the bitcoin addresses in the wallet and reply with transaction information. The Electrum wallet is fast and low-resource but by default it connects to these servers which can easily spy on the user. Some other software aside from Electrum uses the public Electrum servers. As of 2019 it is a faster and better alternative for lightweight wallets than BIP37.

Servers only learn the hashes of addresses rather than addresses themselves, in practice they only know the actual address and associated transactions if it's been used on the blockchain at least once.

It is not very difficult to run your own Electrum server and point your wallet to use only it. This restores Electrum to have the same privacy and security properties as a full node where nobody else can see which addresses or transactions the wallet is interested in. Then Electrum becomes a full node wallet.

A simple but effective privacy leak. Alice gives Bob one of her addresses to receive a payment, but the communication has been eavesdropped by Eve who saw the address and now knows it belongs to Alice. The solution is to encrypt addresses where appropriate or use another way of somehow hiding them from an adversary as per the threat model.

Sometimes the eavesdropping can be very trivial, for example some forum users publish a bitcoin donation address on their website, forum signature, profile, twitter page, etc where it can be picked up by search engines. In the example of the non-anonymous Chinese newspaper buyer from the introduction, his address being publicly visible on his forum signature was a crucial part of his deanonymization. The solution here is to show each potential donator a new address, for example by setting up a web server to hand out unique addresses to each visitor.

Sometimes users may voluntarily reveal data about themselves, or be required to by the entity they interact with. For example many exchanges require users to undergo Anti-Money Laundering and Know-Your-Customer (AML/KYC) checks, which requires users to reveal all kinds of invasive personal information such as their real name, residence, occupation and income. All this information is then linked with the bitcoin addresses and transactions that are later used.

When buying goods online with bitcoin a delivery mail address is needed. This links the bitcoin transaction with the delivery address. The same applies to the user's IP address (unless privacy technology like Tor is used).

Try to find owner of Bitcoin address in our service.

Wallet software usually stores information it needs to operate on the disk of the computer it runs on. If an adversary has access to that disk it can extract bitcoin addresses and transactions which are known to be linked with the owner of that disk. The same disk might contain other personal information (such as a scan of an ID card). Digital forensics is one reason why all good wallet software encrypts wallet files, although that can be beaten if a weak encryption password is used.

For example if you have a bitcoin wallet installed on your PC and give the computer to a repair shop to fix, then the repair shop operator could find the wallet file and records of all your transactions. Other examples might be if an old hard disk is thrown away. Other software installed on the same computer (such as malware) can also read from disk or RAM to spy on the bitcoin transactions made by the user.

For privacy don't leave data on your computer available to others. Exactly how depends on your threat model. Encryption and physical protection are options, as is using special operating systems like Tails OS which does not read or write from the hard drive but only uses RAM, and then deletes all data on shutdown.